Welcome to the OZMAFIA!! Wiki!
Your online source for all information on the visual novel, OZMAFIA!!.
This wiki already contains 1,029 number of edits and a total of 37 articles since its creation on November 14, 2014‎.
» Please do be aware that UNMARKED SPOILERS lie within! «
Rules & Guidelines • Manual of Style • Articles in Need! • Request for Adminship • Admins 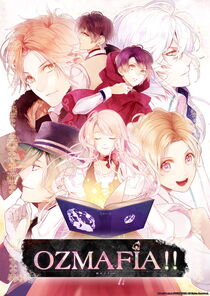 "Our heroine awakes to find herself in an unfamiliar land. She has no memories at all, not even knowing her own name. To make matters worse, the first person she meets is out to kill her. Our heroine runs for her life through the unknown streets, only to run headfirst into another stranger. Fortunately for her, this man is the don of the mafia, Famiglia Oz. With no love for would-be murderers of innocent women, he drives off her attacker and takes her underneath his famiglia’s wing.

This is hardly the end of her troubles, however. Famiglia Oz is but one of many different mafia famiglie in town, and bitter conflicts for territory rage eternally between them all. Only on Sundays does peace return to the town by a mutual compromise, and come the next day the battles continue anew as if they had never ceased.

It is in this war-torn town that our rootless heroine must find her way. Who amongst the mafias simply seeks to use her for their own ends, and who can she truly come to trust... and even love?"

OZMAFIA!! 「オズマフィア」 is an otome visual novel developed by Dramatic Create and Poni-Pachet. The visual novel was first released for PC in June 2013 and later for PlayStation Vita in February 2015. An English version has also been released on PC through Steam on April 29, 2016.

The visual novel also has a manga adaption, and received a short anime adaption during Summer 2016.

Pashet (パシェ Pashe) is the don of Famiglia Boots. She is a knight with a strong sense of justice and is stern and serious about everything. She leads her famiglia as a disciplined army. The sword she wears at her waist is just like her: steely, keen, and unyielding.

Pashet is a very serious person; prioritizing her family above anything and everything else. She is caring towards others, especially those who seem weak or oblivious, but also stern and relentless at times. When she really enjoys something, she will immerse herself fully in it.

Community content is available under CC-BY-SA unless otherwise noted.
Advertisement